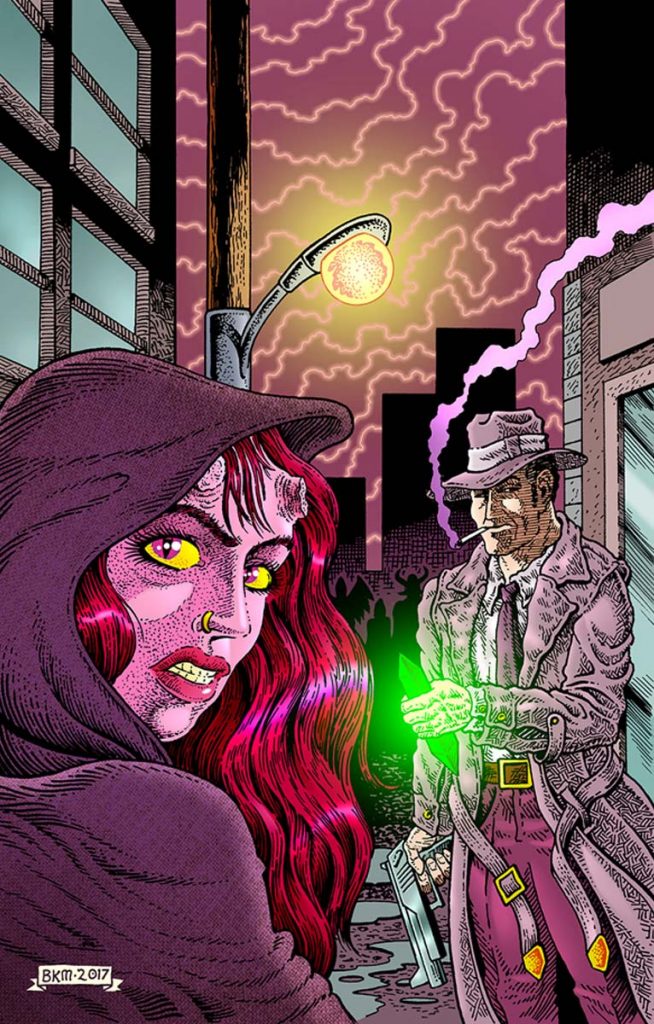 The Ipthian Crystal is a 3-part series first published by Crimson Streets in January 2018. Cover illustration by Bradley K. McDevitt. An excerpt is provided below.

It had been three days since I’d last slept. They say that going eleven will kill you, but I’ve yet to reach that point. I’m good at what I do, I can usually find the places I need to before day eleven comes around.

Thankfully the third day alleviates most of the mental pain felt on the second and first. This is when the two worlds begin to separate. I can see the lines between them, growing more defined every moment, like a vivid hallucination. Most people fall asleep at this point. It’s easy to go back to the hard reality on day three, but once you reach the fourth, things get a bit tricky; it’s not so easy to sleep it off.

I continued stumbling down various alleyways in the city, like a drunk with too many drinks in his system, looking for the right passageway to the next realm. The doors always change their positions. Their worlds don’t function like ours does. So it takes some time to find where the doors have been shifted to each time I make the plunge.

After some time of ploughing through the city, knocking down metal trash bins, scaring rodent families, and tripping over old homeless men sleeping up against the walls, I’d found the doors. They were situated in a narrow alleyway, all the doors aglow with a blue phantom mist around their frames, and dull symbols upon their faces.

I’d gotten a message about a job a few days back. It was a small blank stone from one of the other realms, with no message on it, just a dark flat stone. To anyone else, they might think it had no meaning, but once your body has lacked the right amount of sleep, and the worlds begin to divide, you start to see the glowing symbol on it, telling you which realm it came from.